Elon Musk’s significant influence over the price of Bitcoin has been both a boon and a bane for the cryptocurrency industry.

It’s been said that true power never need not be expressed overtly, but in the shadows. It’s why the Wizard of Oz operated from behind an emerald curtain, and former U.S. Vice President Dick Cheney was the most powerful man on earth whom very few actually knew about.

If you actually need to flex your muscles to demonstrate your power, than you’ve already lost, but good luck trying to explain that to the well-oiled muscled men on Venice Beach.

Which is why for the better part of a decade, the U.S. Securities and Exchange Commission (SEC) has held off on approving one of the dozen or so applications for a Bitcoin exchange traded fund or ETF, because it was impossible to determine if and when manipulation of Bitcoin’s price could or would occur from the shadows.

And while many Bitcoin maximalists may lament the SEC’s overabundance of caution, the regulator’s concerns are legitimate — ostensibly, a lot of Bitcoin is held in the hands of very few Bitcoin wallet addresses.

By one estimate, as much as 40% of Bitcoin is held in the hands of perhaps no more than 1,000 users, according to Aaron Brown, a former managing director and head of financial markets research at AQR Capital Management.

Another estimate by Bloomberg states that 2% of accounts (I believe they mean digital wallets) control 95% of all Bitcoin.

Is Bitcoin Really That Concentrated?

One problem with these sensationalized reports that harp on the concentration of Bitcoin is that on a psychological level, they appeal to the conspiracy theorist in all of us — “Bitcoin is rigged!” — “Bitcoin is controlled by the Illuminati!”

But the other more significant issue with these reports is that they analyze Bitcoin across Bitcoin’s network addresses, leading to misleading statistics and a false narrative that Bitcoin really is in the hands of the Freemasons.

First, not all Bitcoin addresses should be treated equal — for instance, an exchange address holding the funds from millions of users needs to be distinguished from an individual’s self-custody address.

For instance, an institutional custodian holding Bitcoin for family offices or hedge funds may look like a whale on the network level, but could be controlled by an army of anchovies behind the scene.

In fact, as of January 2021, according to research from Glassnode, a blockchain data supply company (full disclosure, Novum Alpha is a client), over the course of 2020, the Bitcoin supply held by single Bitcoin wallet addresses has increased considerably, suggesting an inflow of institutional investors, but the concentration in so-called individual whales, which matters much more for price manipulation, has actually decreased. 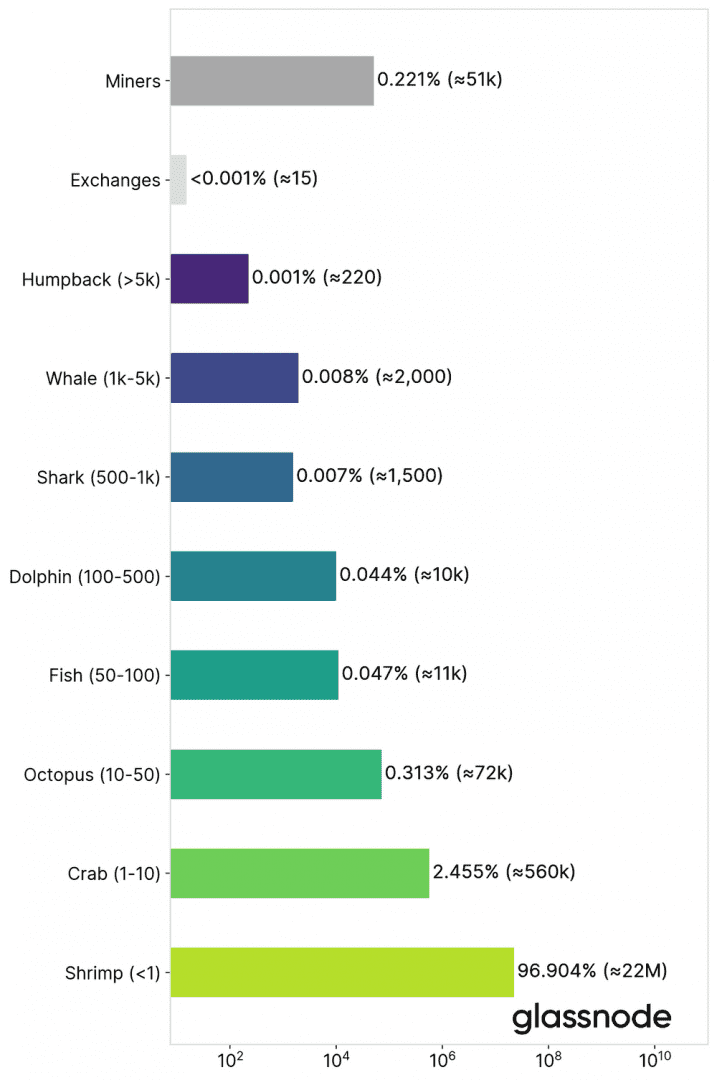 When Tesla announced in February this year that it had purchased some US$1.5 billion worth of Bitcoin, cryptocurrency maximalists cheered.

Finally, here was the living embodiment of Ironman, Elon Musk, come to back the currency of the future.

But wait, Musk had more, not only had Tesla bought Bitcoin, the vehicle of the future, Teslas themselves, could soon be paid for with the currency of the future — Bitcoin.

News of Tesla accepting Bitcoin for its electric vehicles set off a rally in Bitcoin which saw it soar to fresh all-time-highs, coming as close to US$65,000 at one point before pulling back.

But by May, Musk had apparently cooled on Bitcoin, talking up the meme cryptocurrency Dogecoin instead and leaving investors wondering if Musk was ever genuinely serious about cryptocurrencies to begin with.

Then over the course of a weekend, Musk abruptly declared that Tesla would no longer be accepting Bitcoin for its electric vehicles, because of the cryptocurrency’s massive energy needs and possibly significant, carbon footprint.

Those tweets were enough to send Bitcoin in a tailspin and over the course of this week, saw Bitcoin plummet to as low as US$30,000 at one stage before recovering just as sharply.

And guess what Musk did in the aftermath of the flash crash?

You guessed it — he tweeted some more.

First tweeting that Tesla had “diamond hands” which in the crypto-bro parlance meant that Tesla would not sell its Bitcoin holdings regardless of market conditions, and then tweeting that Bitcoin could possibly be more green if only its mining activities were properly audited.

Bitcoin immediately recovered some lost ground in the aftermath of those tweets, as did Tesla’s stock.

If it were any other asset class, tweets of the sort that Musk has been putting out (e.g. suggesting that a publicly-listed U.S. company was not selling a specific asset) would invite scrutiny from the SEC.

The problem is that the SEC hasn’t yet exercised its full jurisdiction over Bitcoin or cryptocurrencies.

Yet if the primary objection that the SEC has against approving a Bitcoin ETF is that Bitcoin can be manipulated by a few whales — then the whale that is quite possibly manipulating Bitcoin’s price is hiding and tweeting in plain sight.

The only thing is this whale doesn’t even own all that much Bitcoin to qualify as anything more than a minnow.

WHY DOGECOIN IS SO POPULAR ?